We are pleased to inform you all that, we had the opportunity to participate and attend in the “21st Biennial Conference on the Biology of Marine Mammals”, which took place in San Francisco, California from the 13th to the 18th of December 2015. This conference is the most important international conference for marine mammal research. More than 2,000 participants from over 65 countries attended. To participate in the conference, it was necessary to compete with over 4,000 other applicants, and in the end two of ECOBACs’ entries were accepted. The first was an oral presentation with the topic title of “RABEN: Mexican Big Whale Disentanglement Network”, given by Biologist Astrid Frisch. The second was a scientific poster on the topic of “Humpback whale (Megaptera novaeangliae) in Banderas bay, Mexico; Relative abundance analysis and seasonal variation during the winters of 2004 to 2014”, by Iyari Espinoza MSc. Also, ECOBAC took part in two workshops, one about disentanglements and the other about mitigation of by-catch in fisheries. Overall, by attending the conference we learnt many things, and took away new research ideas for our own studies and to share with others in the future

…and the whales, where are they? 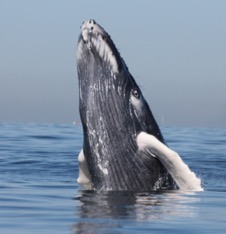 Like all the readers of this bulletin with connections to the marine environment have noted, it has become apparent to us this year that there are very few whales, or at least far fewer than we have seen in previous years. This may be a product of the natural phenomena known as “El Niño”, a cyclical global phenomena that causes the warming of the waters of South America, which in turn causes irregular and erratic rain. What additional impacts does “El Niño” cause? Changes in atmospheric circulation; warming of the planet and higher sea temperatures; marine and non-marine species that are susceptible to these changes will either die or change their migratory roots; and large economic losses may be felt in costal industries, such as reduced fishing etc. Also diseases caused by humidity, heat and excessive rain may arise. Due to “El Niño” having global impacts on weather patterns, it is not just in the Bay of Banderas where its effects are being felt and there is an absence of whales. It is also occurring in Hawaii and other Mexican humpback whale breeding areas such as Guerrero, Manzanillo and San Blas. However, our neighbors of Los Cabos appear to have had more humpback whales visiting their region than usual. We are not suggesting that there haven’t been whales seen in the Bay of Banderas this winter, only that we have seen less. We continue to monitor the situation to see if there are any changes throughout the season, but it is most likely that we will have to wait for the next whale season to see what will happen then and to understand more.

Caring for the whales 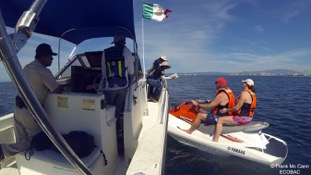 ECOBAC once again is monitoring whale watch activities inside the Bay of Banderas to ensure the correct conduct of vessels around whales, according to the guidelines established in the NOM-131-SEMARNAT-2010. During the vigilance trips, good navigation and whale watching practices are promoted, with the aim to develop awareness, principally in private vessel operators or “pirates” who undertake whale watching without licenses and are not informed of proper whale watching conduct. In addition, whale watch tour operators are monitored to check that they are following the whale watching guidelines. This is achieved by the support of Opequimar marine center, the 8th Zone of the Mexican Navy and committed volunteers. This is the fifth year that this project has been running, and the results so far have been positive. In the last two seasons we have witnessed far fewer episodes of vessel crowing around whales, and the number of licensed vessels has been increasing, therefore reducing the number of boats which aren’t licensed and are unaware of proper whale conduct. We are also focused on protecting and better informing vessel operators on how to maneuver and navigate around mothers with calves. They are the most vulnerable groups of whales and they are often the easiest to find, the most suitable for observation, and a very popular whale encounter for tourists. There are 16 monitoring trips programmed this season, and as of yet we have only completed half of them. The preliminary results from the first eight trips suggest that there is a much lower abundance of whales compared to previous years, this has also been expressed to us by concerned tour operators, who have reported that this year they have had to travel much larger distances to find whales.

The song of the whales: a possible indicator of welfare and health

As you all well know, whales sing and only in their breeding areas. That is why here, in the Bay of Banderas, we are fortunate to have the opportunity every winter to listen to the romantic songs that males sing to the females, to court them and become fathers to newborn whales the following year. Therefore, what is happening now that there are so few whales reported in the bay? It is the same question we have been asking ourselves at ECOBAC, therefore we decided to investigate, to see if there are lots of males singing or only a few. For this reason, during our “Program of Prevention, Information, Vigilance and Monitoring of Humpback Whales”, the biologists and volunteers onboard of the vessel are taking a little bit of time out to drop a hydrophone, so that we can listen and monitor the activity of the male singers. 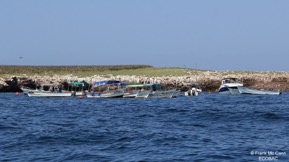 The continued rise of tourist traffic in the Marietas Islands National Park has led to a considerable increase in vessel traffic in the area know as “the channel” (“el canal”), situated between Punta de Mita and the Marietas Islands National Park. This is due primarily because Punta de Mita is the area closest to the National Park, and therefore the area where it is most accessible to the tourists. It is for this reason, that at ECOBAC we have set out to actually count the number of vessels that pass the area in a set amount of time. Through this we hope to evaluate whether this marine traffic is affecting in anyway the whales, because of course “the channel” is the area that the whales use as the entrance to our beautiful bay.

Training a necessary tool for conservation

This year, in addition to focusing on local training, we jumped several states to train tour operators of the Guerrero coast. Thanks to the “Whales of Guerrero Project”, who organized the workshop, representatives from ECOBAC and the Tecnológico de Bahía de Banderas taught workshops over two days to 35 participants, who were all very interested to learn about whales, their behavior and the correct manor of how to accomplish successful whale watching tours. The workshop involved two days of theory, and one day of practical, where they went out aboard two boats along the coast of Guerrero to look for whales, and to put into practices what they had learnt. The workshop was attended by people from the local areas of Ixtapa, Zihuatanejo and Barra de Potosí. The response was excellent, and in general we are confident that all the attendees now know how to successfully whale watch without altering the behavior of the whales, and above all else caring for the whales whilst continuing to conserve them as a source of income.

Today it is common knowledge, due to constant media coverage, that the climate of the planet is changing. It is now necessary that we are conscious and aware and of all of our actions, and that we try to moderate and change them to help with the conservation of the environment. It is for this reason that this year “The 2nd Festival of Whale Conservation” (“2do Festival por la Conservación Ballenarte”) is being held, with the focus of raising awareness in local people, national and international tourists, from children to adults, with the objectives that they grow with the conviction of caring and respecting our natural environment. For this purpose, interactive modules were designed with board games, such as “Zoomergidos”, which is similar to the traditional Mexican “lotto” but with marine mammals, their anatomy and their greatest threats to survival; also a specially designed games called “Anchors and Lifejackets”, a version of “Snakes and Ladders”, but with actions that guide the children to conserve the environment. In this way, the children and adults can enjoy and learn more about the biodiversity of marine mammals of our region and how to conserve and care for them.

Festival Ballenarte will be held on the 16th, 17th and 18th March

Do not forget about the Festival Ballenarte! This is the program of activities.

Loving our whales:  Talk about whales for kids

Come and have fun with our educational games and interactive displays.

Arches of the PV Boardwalk (Malecon)

With activities to compliment the Festival Ballenarte, in February we will be visiting schools and public libraries giving talks about whales and the importance of caring for the oceans.