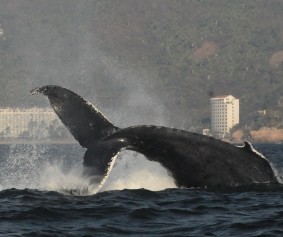 Dear friends, collaborators and whale lovers, we would like to share with you the events and outcomes of the whale watching season 2014 – 2015.
The whale watching season finished officially on the 23rd of March, so at ECOBAC we closed our field season with our humpback whale research, conservation and protection projects. This season was quite varied in the results as you´ll see, so this means we have to keep up the hard work and intensify our efforts every winter when the humpbacks come to mate and to calf at Banderas Bay.

A reunion with old friends: Photo-identification catalog of humpback whales 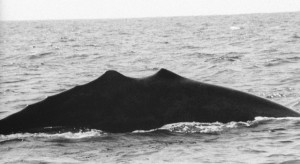 During the photo-identification project of humpback whales of the Banderas Bay this year, we were lucky to reencounter a very peculiar whale that is known as “Camello” (the “camel” in English). “Camello” is a humpback whale that has acquired his name due to the strange form of his dorsal fin, which is similar to the humps of some camels. “Camello” is a male whale that was sighted by Ecotours de Mexico, collaborators of the photo-identification catalog of the Banderas Bay. This peculiar whale has been a continuous visitor of Banderas Bay since 1999, with only two years that he has not been spotted, which of course doesn’t mean that he didn’t visit the bay, but that maybe we didn’t see him. “Camello” chooses the bay for it’s warm waters; most years he has been observed in large mating groups, competing hard for access to a female, whilst on other occasions he has been seen resting and even singing. In addition to “Camello”, we have encountered other old acquaintances, including “Telaraña”, a whale that has been seen in the bay on numerous occasions since 2001. Without doubt this year was a year of reunions.

On the 2nd of December, before the official start of the whale watching season, a report was received of an entangled humpback whale. After three days of searching the whale was finally located, and was successfully released from the fishing gear. The whale, a young calf, was entangled with netting via the mouth and around both pectoral fins. After several hours of work, the whale was successfully disentangled. In charge of the national coordination of RABEN, ECOBAC is pleased to be part of this important work supporting the conservation of the humpback whales and is very appreciative of the full commitment and participation of all the members of the RABEN team of the Banderas Bay who always work with tirelessly and with high spirits, as do the staff of SEMAR, Vallarta Adventures, Explora Vallarta, Ecotours de Mexico, ITBB and PROFEPA.

In news from the national network of 15 teams of RABEN, this year we would like to congratulate the following teams: 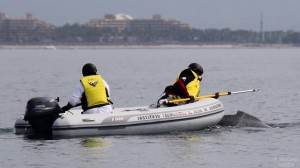 • RABEN Los Cabos, for their three successful rescues
• RABEN Oaxaca for the rescue of a mother and calf
• All the teams of RABEN that responded to reports of entangled whales, and that woked in the training of the staff, espeacially RABEN Mazatlán, Loreto and Manzanillo

Less harassment of the whales: Program of Prevention, Information, Surveillance and Monitoring of Humpback Whales

As part of the Program of “Prevention, Information, Vigilance and Monitoring of Humpback Whales in the Bay of Banderas” this year ECOBAC conducted 19 vigilance trips, with the purpose of sharing information with the vessels that are involved in illegal whale watch activities and to monitor compliance of the NOM-131-SEMARNAT-2010 of the vessels that have a license for whale watching. In general less harassment of the whales, by both tourist companies and private vessels, was observed this year. This maybe due to the increased popularity of the hidden beach of the Marietas National Park, with some tourists preferring to visit the islands rather than whale watch.

Yet we are still analyzing data to understand the distribution of vessels in relation to humpback whales within the Banderas Bay. 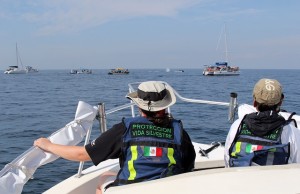 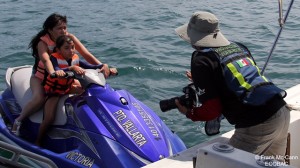 One problem that is continued to be observed is the harassment of the whales by Jet Skis. It is prohibited in the NOM-131-SEMARNAT-2010 that Jet Ski users approach whales, but it continues to occur and it is putting at risk the life of the tourists involved, which on the majority of occasions are adults accompanied by children.

Like every year this program has been carried out with thanks to the support of the Comisión Nacional de Áreas Naturales Protegidas (CONANP) (in English the “Mexican National Park Commission”), OPEQUIMAR Centro Marino, la 8va Zona Naval, PROFEPA and various committed volunteers. The vigilance trips were concentrated during the holiday season, weekends and public holidays. On the weekend of the 31st of January to the 1st of February, with the help of PROFEPA Jalisco, two trips were carried out. The objective of PROFEPA was to monitor the whale watch activities and if they found vessels in breach of the whale watch regulations and to apply fines when necessary. 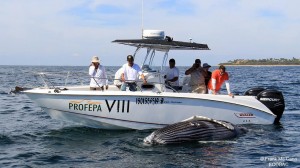 However, it’s not all good news. Sadly, this season we have recorded the death of a humpback whale calf that was run over on the 30th of December of 2014 by a tourist boat. Unfortunately, this occurred on one of the days when there is more tourist activity in the bay. For the purpose of reporting and evaluating the damage, PROFEPA Nayarit and Jalisco in coordination with the 8va Zona Naval and staff of ECOBAC, went to the area where the calf had been reported. Sadly, the calf had died, and it appeared that a vessel had broken the spinal column and made several deep wounds. 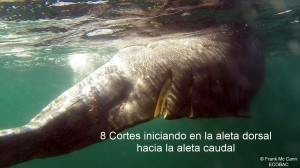 . It is a regrettable incident, and for the time being we are still waiting for the response from the authorities before a complaint is filed. This type of event is what ECOBAC has being trying to avoid with the launch of their campaign “yo si cuido las ballenas”/ “I care for the whales”, and from now on we hope that this situation will never be repeated, that accidents like this do not affect the continued recovery of the population of the humpback whales of the North Pacific, and that this does not give a bad impression of marine tourism at a local, national or international level. This incident also represents a great risk for both tourists and staff of local vessels. 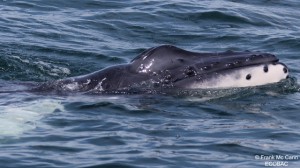 Not everything is the fault of humans, on many occasions whales die from natural causes that we understand very little about. Such is the case of a calf that was abandoned by its mother on Sunday the 22nd of February. During one of the ECOBAC vigilance trips, a group of whales was observed that was constituted of a mother, calf and escort (McE) that were interacting with each other. On more than one occasion the mother was observed to be carrying the calf. However, after 20 minutes the mother and the escort were observed to swim away from and abandon the calf. 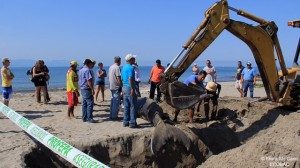 The ECOBAC team was present for more than three hours monitoring the lone calf, which began to swim in circles and by the end of the observation appeared tired and disorientated. Through the night reports were received of a humpback whale calf stranded alive on Los Tules beach. The stranding was attended by pubic saftey officers, ecología municipal, staff of RABEN, ECOBAC, PROFEPA, volunteers and the press. The primary action was to try and return the calf to the ocean, however due to strong currents and the weakened state of the calf, the young whale was quickly pushed back on to the beach, where it was knocked around in the break water. Unfortunately the calf died, and was burried the next day following health regualtions in PROFEPA’s protocol for stranded marine mammals.

Kuikani the ECOBAC mascot: The campaign “Yo si cuido a las ballenas “/ “I care about the whales”

With the main aim of supporting the continuation of the campaign “Yo si cuido a las ballenas’/ “I care about the whales”, Kuikani, an inflatable whale the size of a calf (6.5 m), is now located at the instillation of the Administración Portuaria Integral/Port Authority (API). The principal aim is to inform the local population, tourists and tourist service providers about good navigation practices during whale watch a 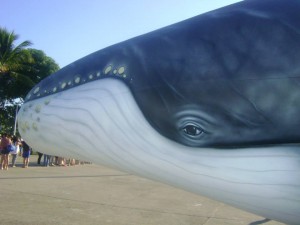 ctivities. Volunteers from different universities such as Tecnológico de Bahía de Banderas amongst others, very kindly participated in sharing information about the campaign by handing out leaflets in English and Spanish which explained the regulations for whale watching to tourists that were arriving or departing from a whale watch tour. The response was positive, and on occasions tourist showed gratitude that campaigns such as this exist, and were keen to take tours with only authorized vessels that respected the regulations. Other volunteers helped us by sharing information with vessel captains in the fuel stations of OPEQUIMAR, in the marina of Nuevo Vallarta and Punta de Mita. 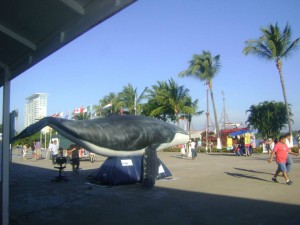 Like every year, ECOBAC relies on the support of the general public and this year we are very pleased to thank the support provided by the Asociación de Empresarios de Puerto Vallarta y Bahía de Banderas, who have shown special interest in the environmental education and protection project, and supporting the campaign “Yo si cuido a las Ballenas/ I care about the whales”. Also special thanks to API, Opequimar, 8va Zona Naval and the volunteers that supported us in the promotion of the campaigns to help raise awareness: A Frank Mc Cann, Fabiola Flores, Jorge Morales, Anayeli Moreno, Haniel Ascencio, Monserrat Servín, Artemio Martínez, Liliana Gallardo, Sandra Magaña, Alejandro Rodríguez, Ana Ezcurra, Anel Acosta, Michael Acosta, Job Reyes , Katie Lavery and Laura Fenwick. We thank Nicky Ransome for the translation of this newsletter.