Menu
This whale season is not over yet, but it has been one of the most complicated but at the same time successful seasons for the teams of RABEN, The Whale Disentanglement Network. We have rescued 8 whales nationwide and at the time of writing this newsletter, our RABEN Manzanillo team is in action looking for a whale… 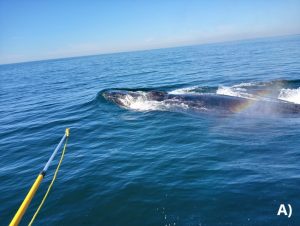 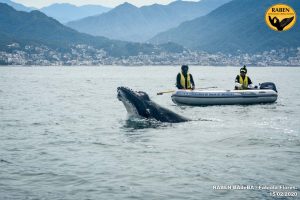 Two of the successful RABEN rescues, winter season 2020: A) Entangled mother, case shared between San Blas/ Banderas Bay teams, released on Dec. 26, 19; B) Entangled calf attended on 5FEB20 in Banderas Bay. We are receiving more reports than in previous years, but it is probably because people already know how to report, our WhatsApp icon on the websites www.ecobac.org y www.rabenmexico.org is giving very good results. 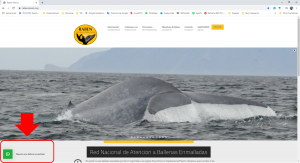 The new WhatsApp icon allows you to communicate at the moment to report an entangled whale with the RABEN team. We share our new VIDEO with the success stories of this season, we know that this is not over yet and we are all ready for when the whales need us again. New RABEN Video – Success cases 2019 – 2020 These successes would not be possible without the valuable support of the people who take the time to report properly, even more with the people who help us to relocate the whales or not lose sight of them. The best example is the rescue case on 22DIC19, where an authorized whale watching tour operator in Punta Mita found and REPORTED the entangled whale, waiting for the first relay to arrive, which was the park ranger of the Marietas Islands National Park. Then came the second relay with another whale watching tour operator of Punta Mita that took one of the RABEN team members to the site. Finally, 1 hour and 30 minutes later, the rescue boat and the rest of the RABEN team arrived. Since the whale was outside the Bay and it was late we requested support from the 8th. Navy Zone, which assisted us with a boat and personnel of the Captaincy of Puerto de la Cruz de Huanacaxtle. We only had 2 hours of light to perform the maneuvers and without all this support, that time would have gone away in trying to relocate to the whale. So the moral is that thanks to the effort and support of everyone, RABEN can succeed and we all can save the whales.

RABEN works through donations and volunteers who give their time and money, so your contributions are very important! Thank you so much! DONATE HERE As we talked about in our last newsletter, each rescue costs an average of $500 American dollars and in one of the rescues, we lost an extension knife and adapter with an approximate cost of $250 dollars. The tools we use are very specialized because they are designed not to hurt the whales and make quick and efficient cuts. Do you want to do an in-kind donation? We need knives like this one: