We successfully finished another whale season, but our work is not done.

We continue working on the conservation and research of the humpback whale in Banderas Bay!

Take a look on some of our results from the 2022 whale season:

In our Banderas Bay Humpback Whale Photo-Identification Catalog we have already identified 2,848 different whalesand a database with over8,800 records! 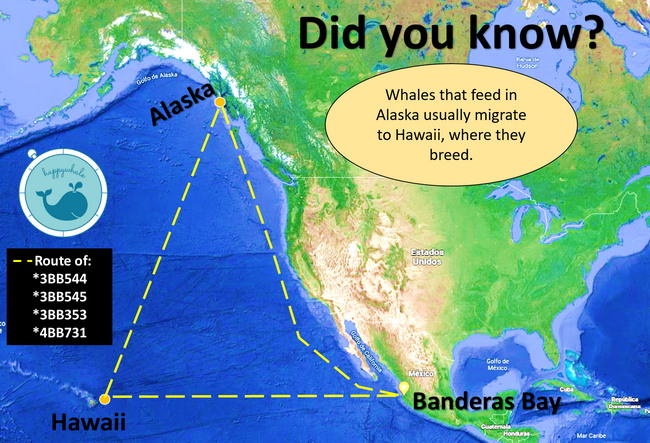 A superhero in Banderas Bay! 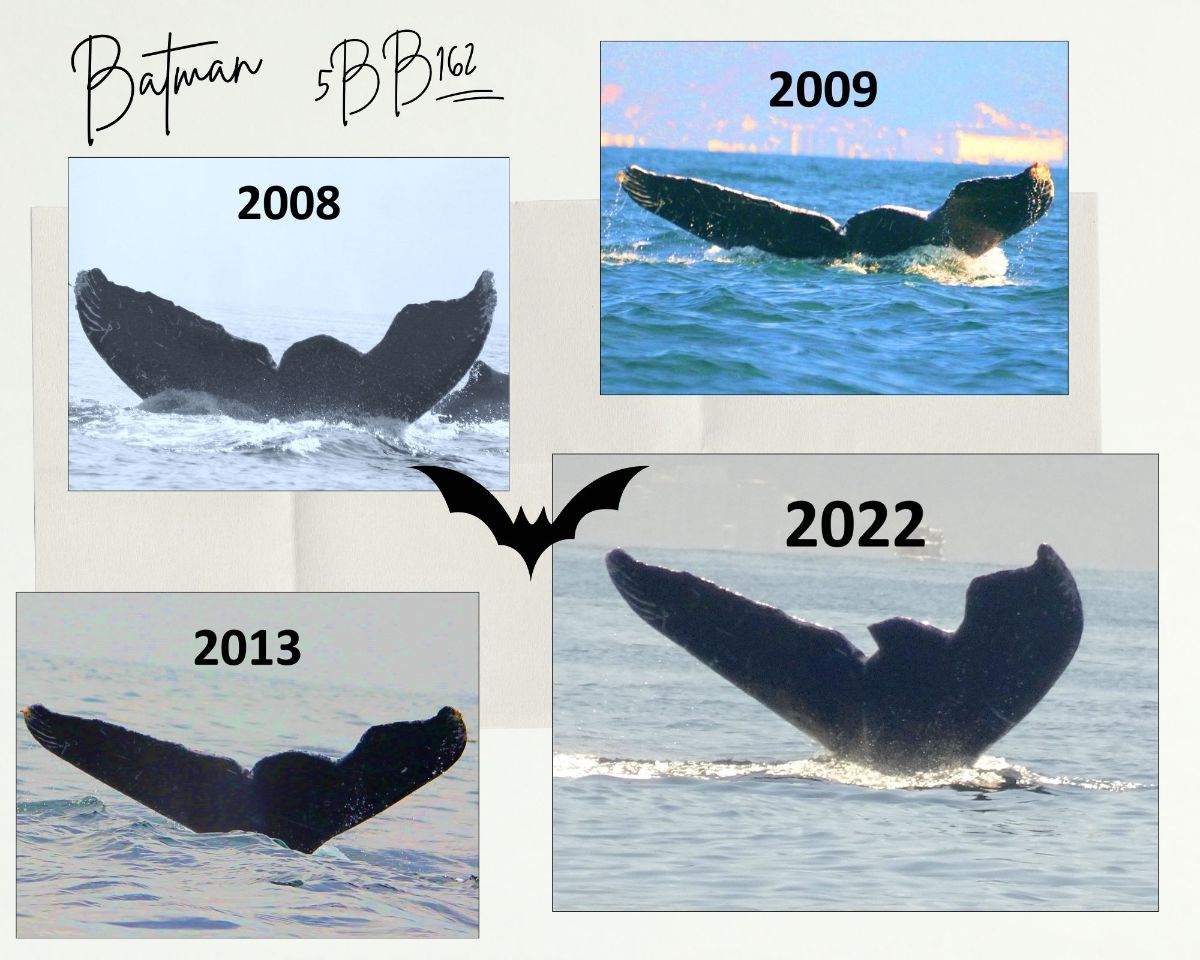 We are not talking about the character from the comics, we are talking about our beloved Batman (5BB162)who has visited us once again.
Counting this season, he has visited Banderas Bay on 16 different years!
We’ve known this male since 1997, and he’s frequently seen in large competition groups. When he is not in its breeding range, he can be found in California where he normally feeds.

Reasearch outing and the “Marietas”

Since November and for a third year consecutive yearwe have been conducting humpback whale research outings in Banderas Bay. Our research route takes us around the entire Bay, from Puerto Vallarta to Yelapa and Punta de Mita.

During the sampling in early March, we discovered, much to our delight, that 3 juvenile whales that were circling the Marietas Islands last season, which we dubbed “The Three Marietas” have returned this year!They also seem to be feeding in the same area, which is an unusual behavior in a breeding ground. We’re looking into this anomalous occurrenceand hope to see them again next year!

Our research outings are carried out thanks to the support of Biomar A.C Foundation, Stanley W. Ekstrom Foundation, Opequimar Centro Marino and Ecotours de México. 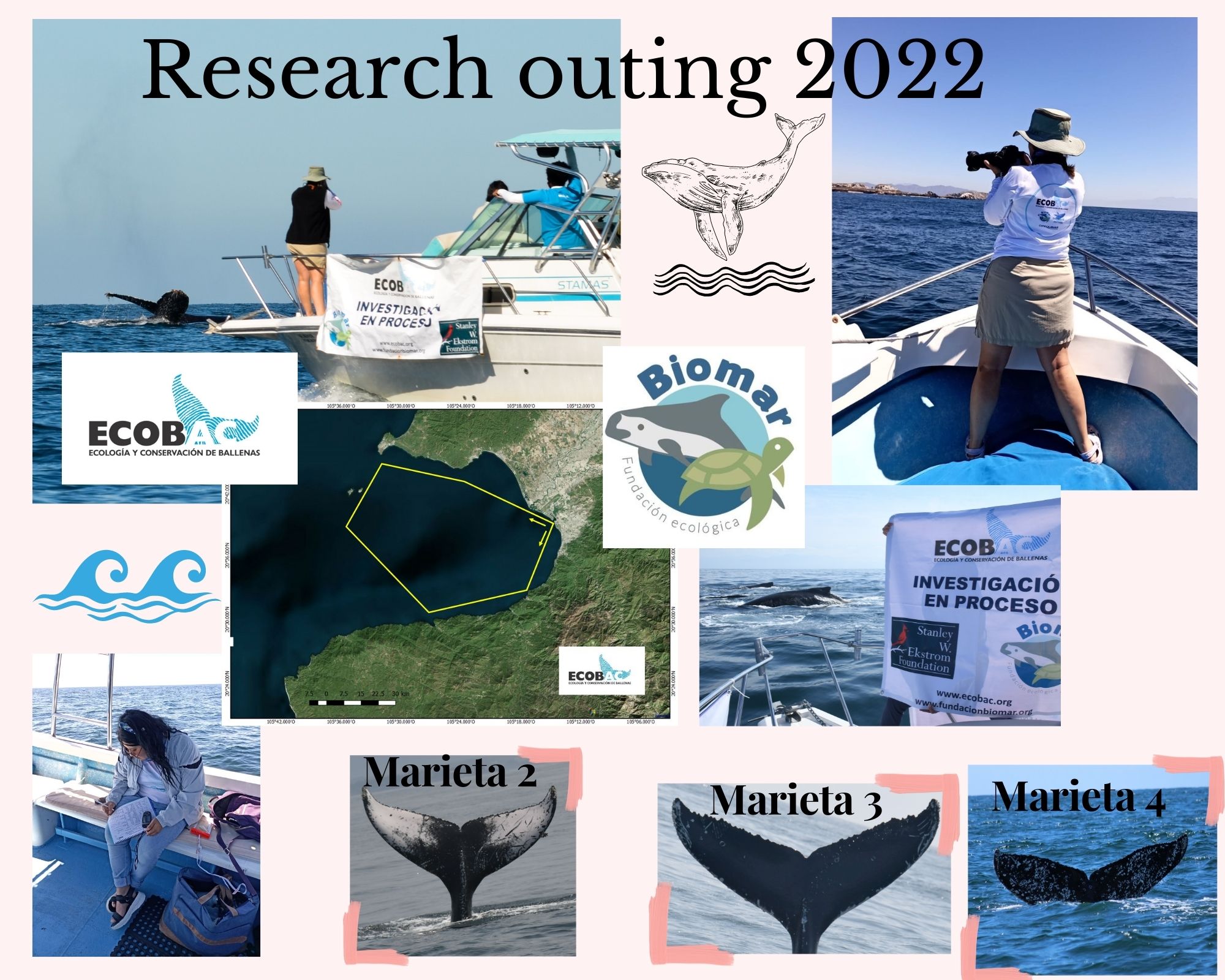 RABEN to the rescue! 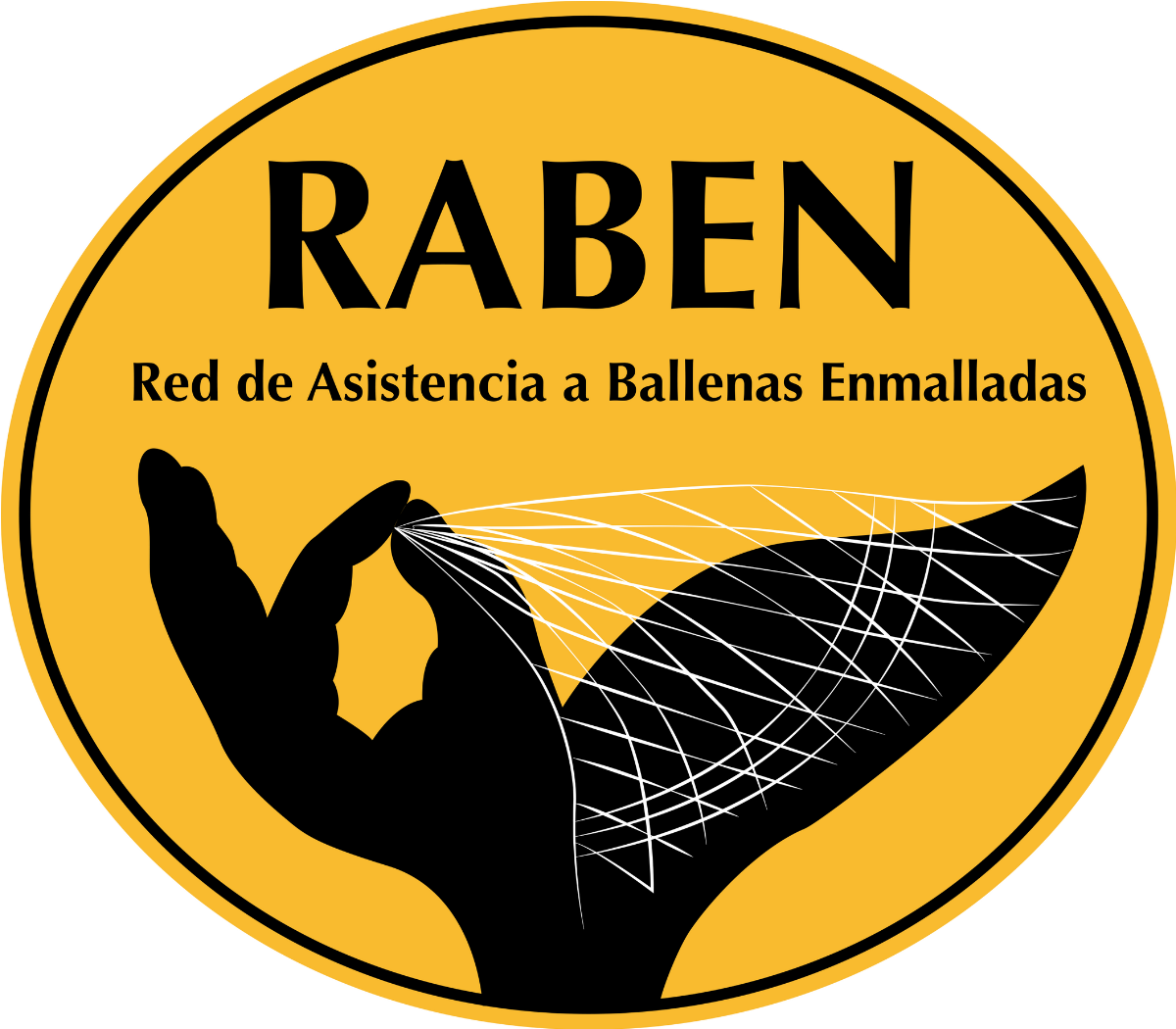 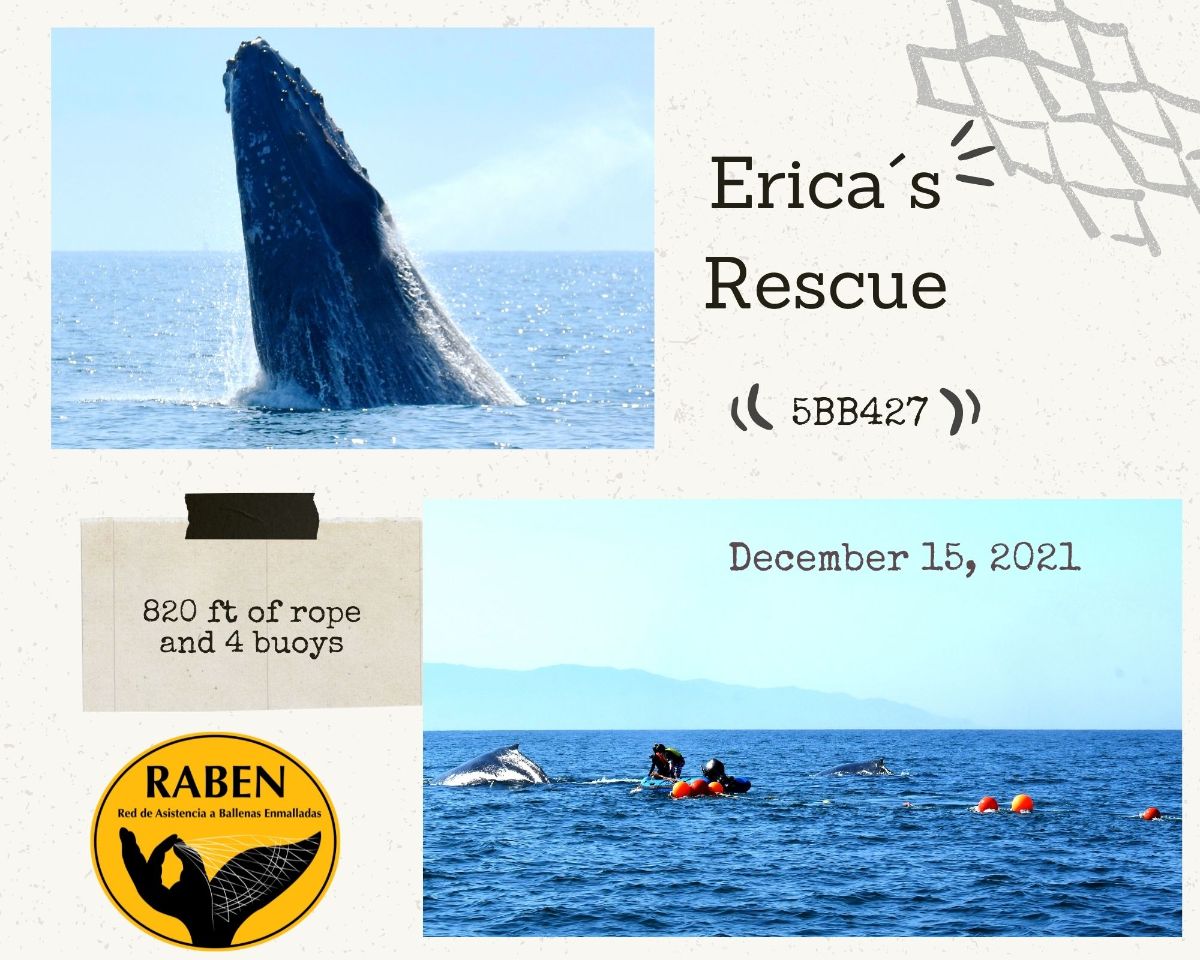 The first case, on December 15, 2021, involved a beautiful adult female known as “Erica”,who was entangled from the mouth to the fluke with 250 meters of rope and four buoys. 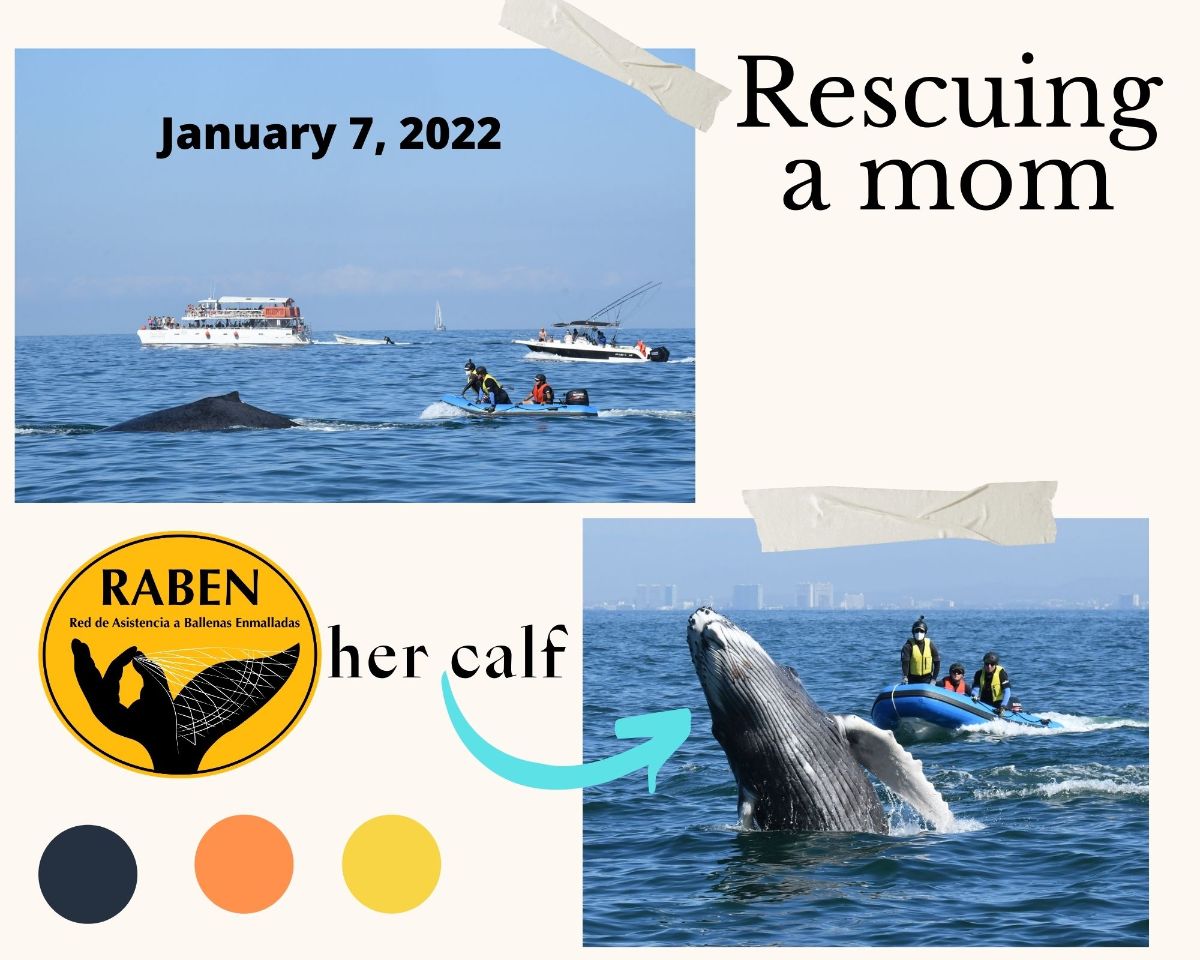 The second case, on January 7, 2022, involved the rescue of a mother and her playful calf. The mother was entangled ina gillnet and ghost neton the right side of her mouth. 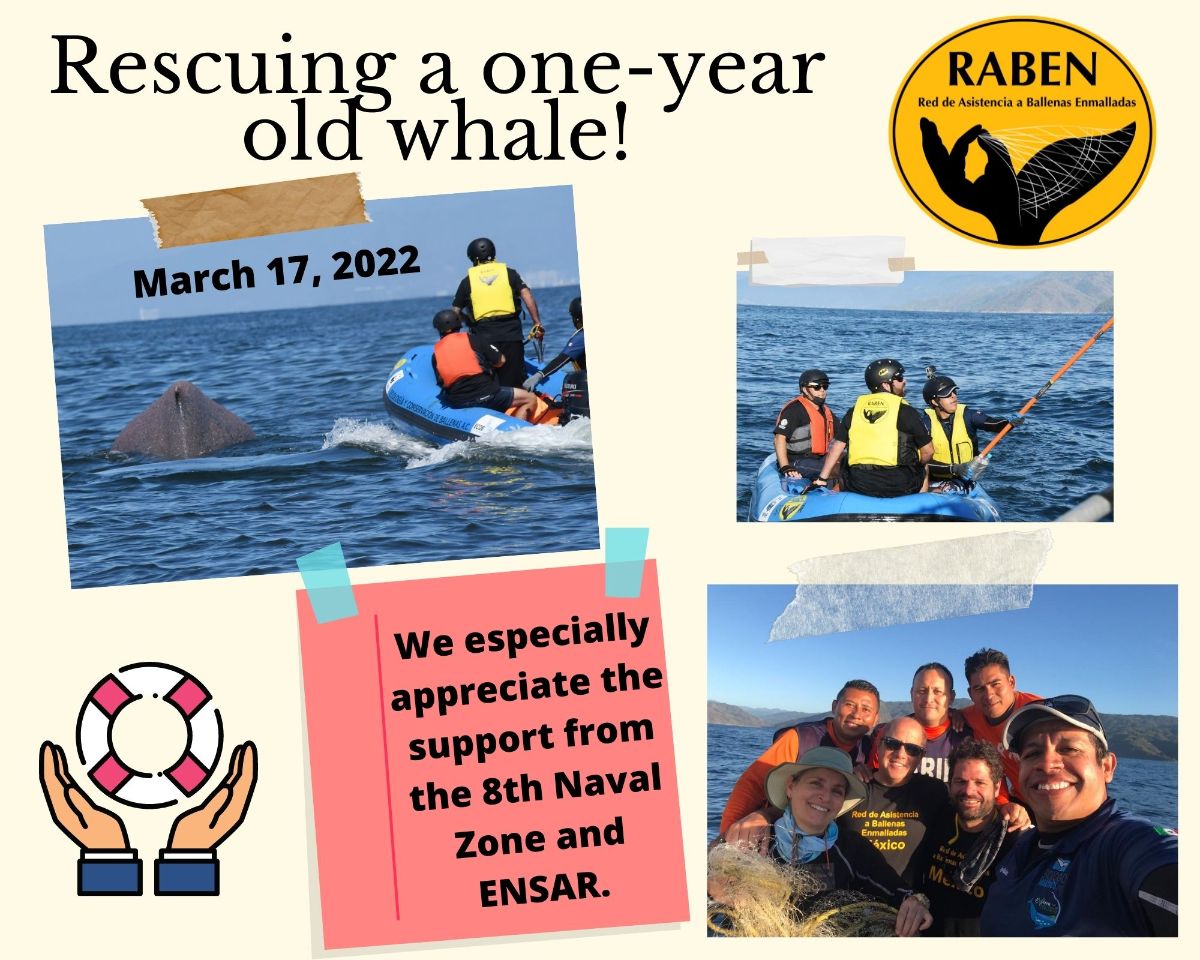 The third case, on march 18, 2022, was the rescue of a one-year-old juvenile whale. This whale was found heavily parasitized and with its tail entangled in a 3.5″ gillnet along with 2 anchors. Definitely a second chance at life!

As every year, during weekends and holidays we continue to educate tourists, boat users, and their operators about how to navigate safely during whale season, as well as whale watching guidelines. 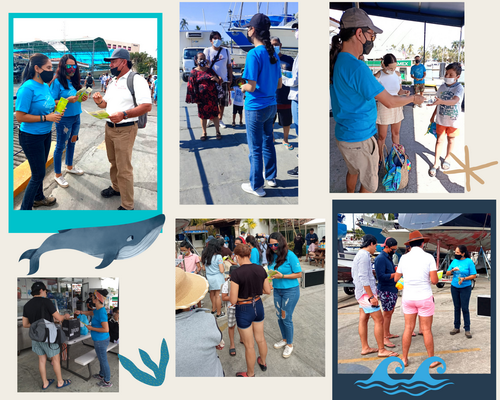 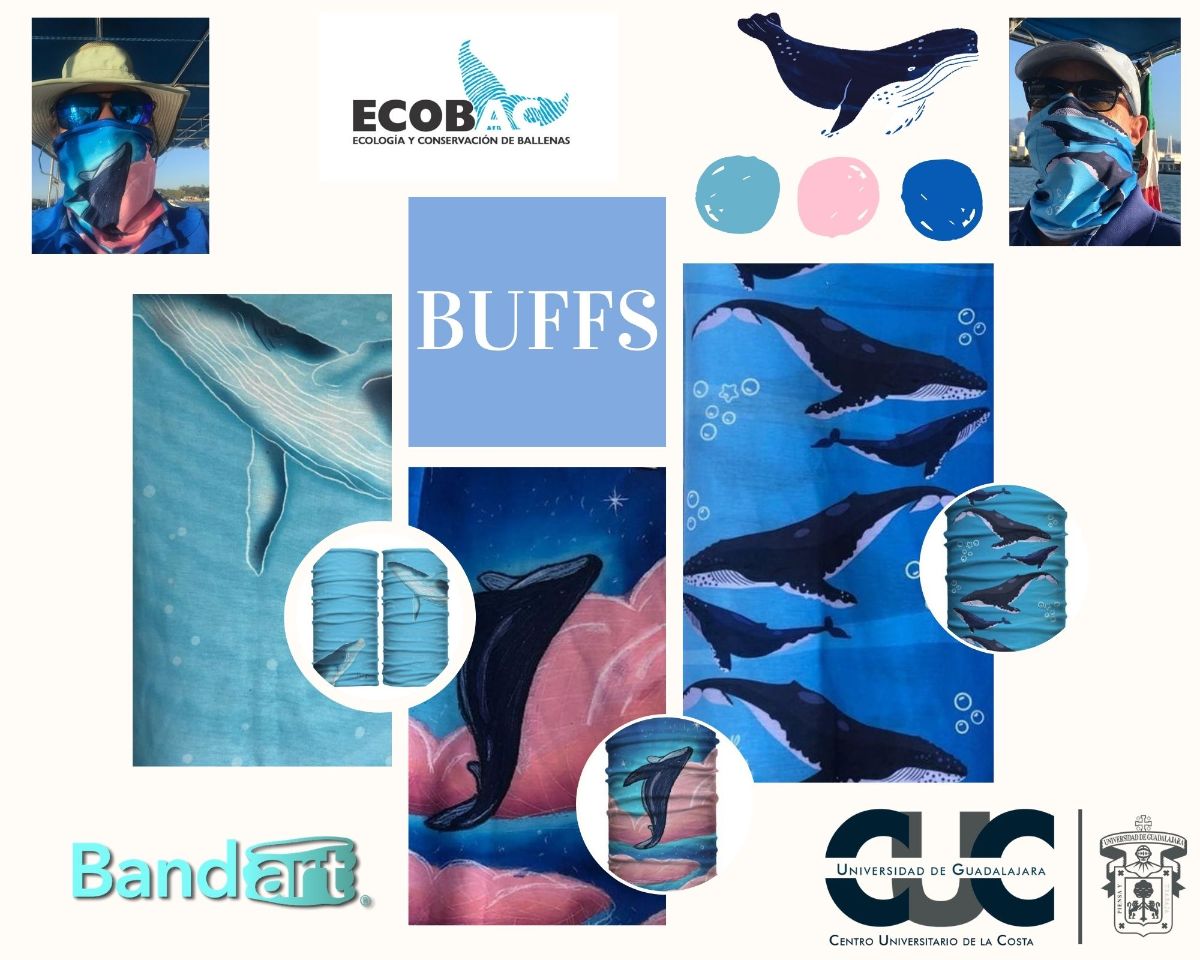 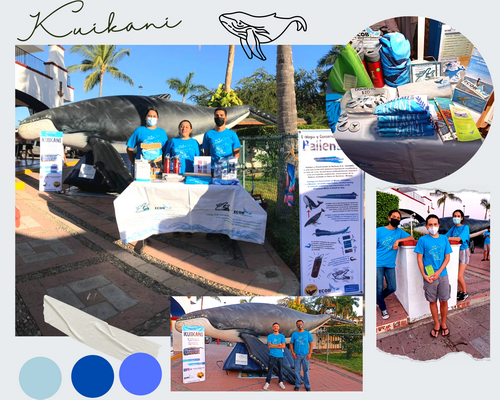 World Whale Day!
For the past 26 years, Ecology and Conservation of Whales (ECOBAC) has been celebrating World Whale Day every day by working on research, conservation, and protection projects for these amazing cetaceans. We commemorated this special day with an educational event at Marina Vallarta. 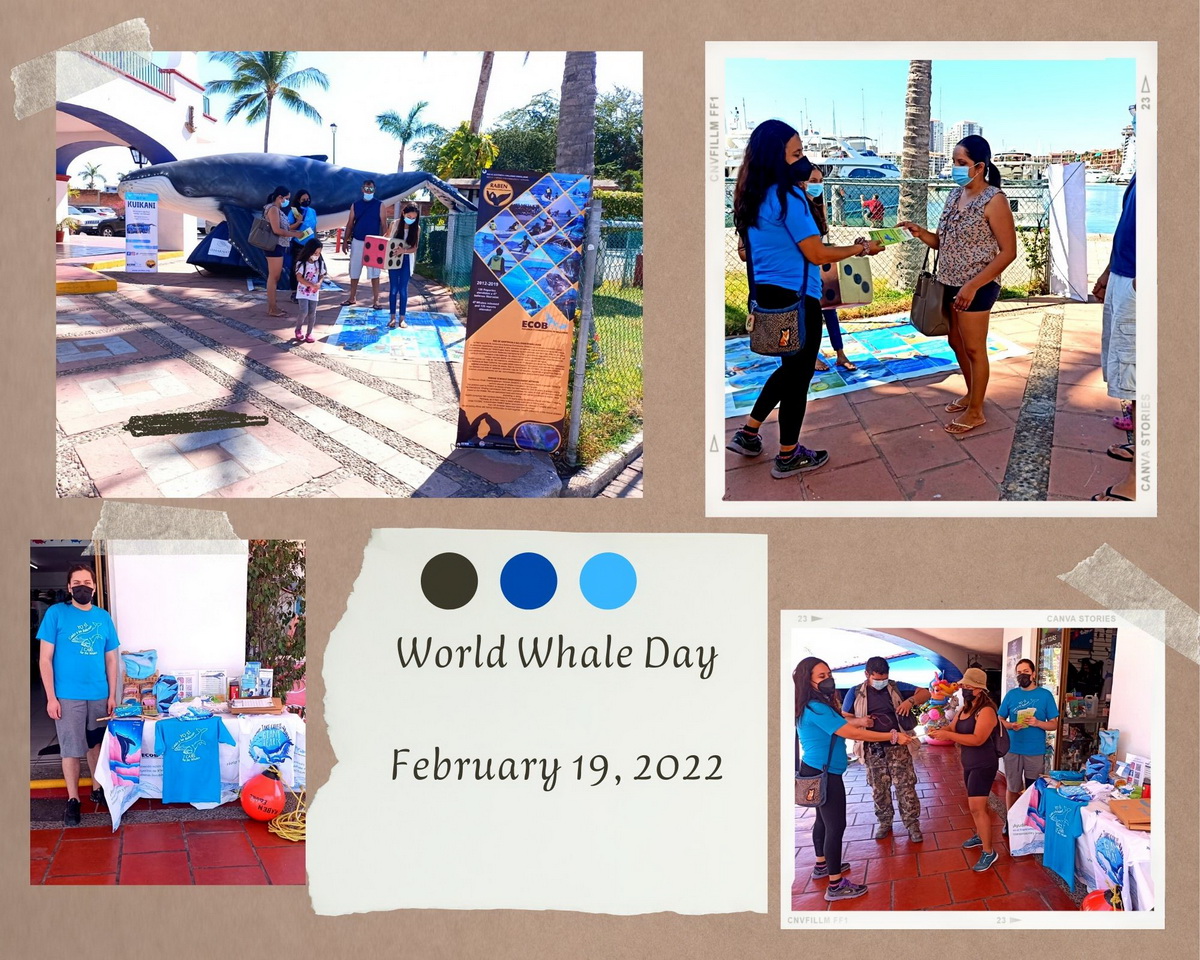 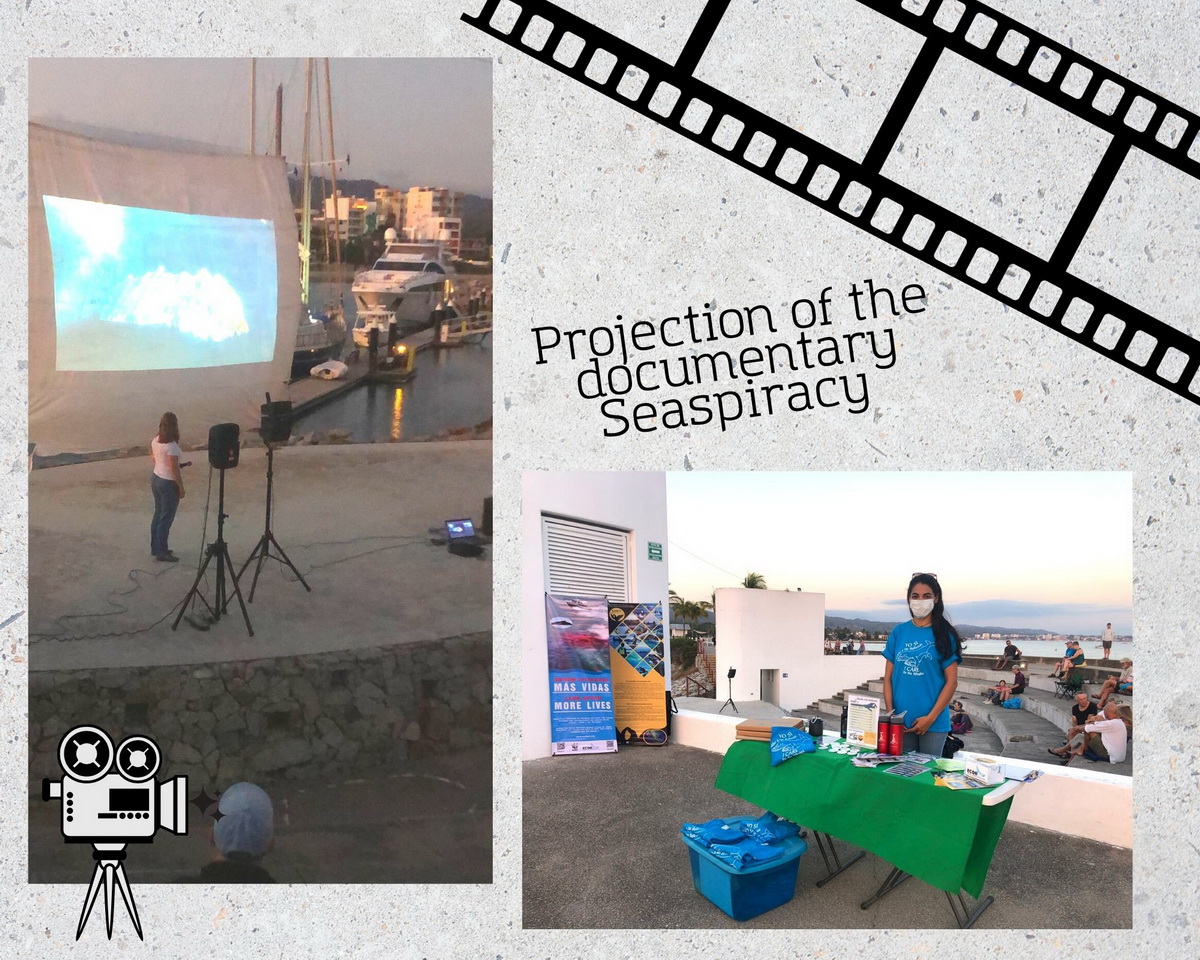 Thank you for your help!

We thank FIBB Catalog collaborators since it is because of them that we have been able to compile one of the most comprehensive catalogs in the North Pacific. We thank all of them, past, present, and future collaborators who want to be a part of this great work:

Thank you for organizing the talks and events, Katrina Liana and Michael Danielson from PV Sailing and the Marina Riviera Nayarit.

We thank the 8th Naval Zone and ENSAR. 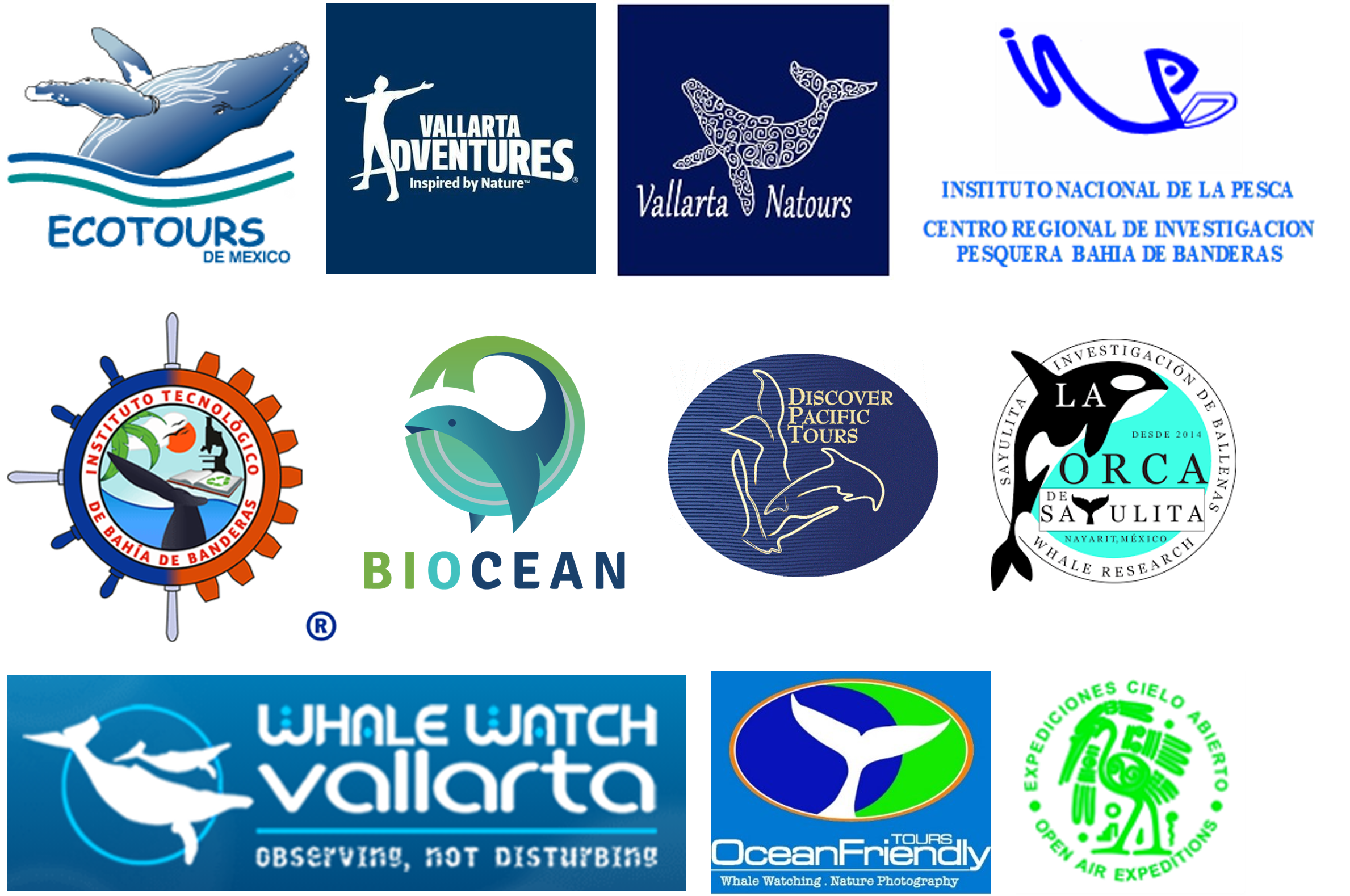